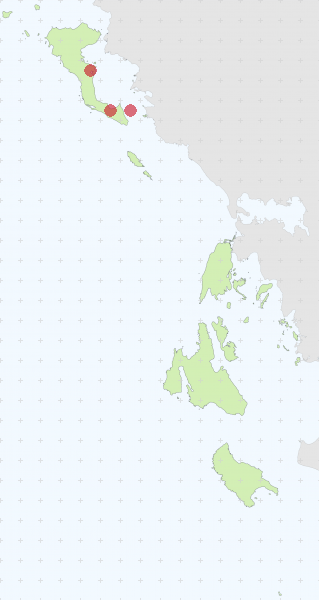 Annotation: The identity of Ionian oaks specified as Quercus robur is controversial: It was identified with Qu. pedunculiflora, but Greuter 1977: 36 transferred corresponding plants to Qu. robur subsp. brutia; under this name they were included in the »Atlas Florae Europaeae« (Jalas & Suominen 1976: 76). This was not confirmed by Christensen in »Flora Hellenica« (Strid & Tan 1997: 48), who classified the Greek populations as Qu. robur subsp. pedunculiflora. The first report for Corfu is based on the type collection of »Quercus haas var. atrichoclados« (Bornmüller 1889: 130). For decades no further observations were known until a more recent collection (in 1975, from near Potamos; UPA), but more locations were committed by G. Gasteratos (in litt.). The occurrence of »Qu. robur« on Cephalonia (Dallaporta 1821: 123) was never verified. [2016-12-11]