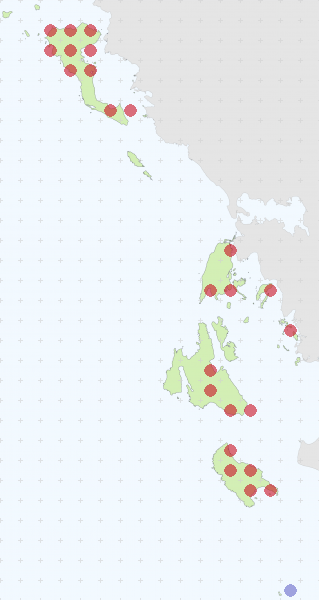 Annotation: Flower colour varies in Narcissus tazetta, and such variants often are classified as subspecies. The Ionian plants are said to represent subsp. italicus according to »Vascular Plants of Greece« (Dimopoulos & al. 2013: 46). This may date back to Hayek who had placed the Ionian records under »subsp. lacticolor« with cream-coloured tepals (Hayek 1932: 104). Wild growing populations on Corfu and Zakynthos, however, show flowers with tepals purely white (and with a deep yellow corona), and thus clearly correspond to the nominate variant, quoted as subsp. tazetta in »Flora Europaea« (Webb in Tutin & al. 1980: 80). In Greece subsp. tazetta is only reported from the Peloponnese so far. We have no information concerning the perianth colours of this winter flowering species from the other Ionian islands. From Kastos island it was reported as cultivated only (Chousou-Polydouri 2005: 77). Yannitsaros & al. (Yannitsaros & al. 1995:14) have mentioned the occurence of a Daffodil species on Stamfani, which may have been N. tazetta, but its specific identity has to be verified. [2016-04-02]