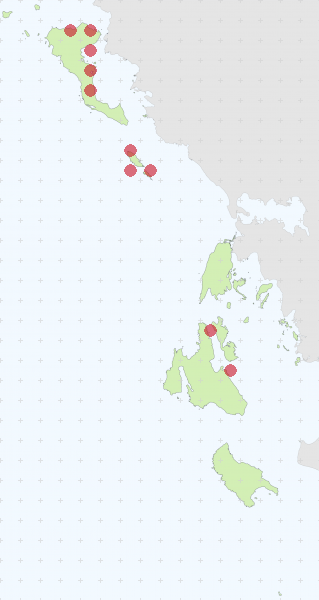 Annotation: In recent times Hyoseris lucida (based on Egyptian material, and so far considered a S Mediterranean taxon) is often separated from H. radiata (s. str.) at species level (see e.g. Brullo & Pavone 1988), even though this is not corroborated by karyological data (Klein & al. 1997). H. radiata subsp. graeca, a plant of sand coasts, with slightly succulent leaves (based on material from the Aegean), appears as synonym of H. lucida in the »Med-Checklist« (Greuter & Raab-Straube 2008: 488) as well as in »Vascular Plants of Greece« (Dimopoulos & al. 2013: 61, 204), and is considered the only representative of this group in Greece (including Crete). Materials from the (northern) Ionian Islands mainly occur in rocky habitats or ± open grassland (partly with extensive grazing). Following the diacritic characters reported in the literature (which are not always convincing) our plants seem to represent more or less typical H. radiata especially regarding consistency (not succulent!) and shape of the rosette leaves (however variable) as well as pappus size, but are different from H. lucida as present for comparison from the Cyclades or Egypt. By the way records from Cephalonia (Bolòs & al. 1996: 99) are not from sandy beaches but refer to plants from stony Cistus garigue (»Cistetum salviifolio-cretici«) on calcareous slopes. [2016-03-01]